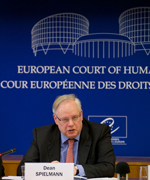 Today is the formal opening of the judicial year at the European court of Human Rights. At this occasion a seminar on “Implementing the European Convention on Human Rights in times of economic crisis” is held.Yesterday, the president of the Court, currently Dean Spielmann, held his annual press conference. The most important result of all the efficiency measures introduced by the Court, including the single-judge procedure made possible by Protocol 14, led to a remarkable result. For the first time in the Court's existence the number of pending cases is on the decrease, falling from 150,000 at the start of 2012 to 128,000 currently (16% decrease). Will the caseload crisis then finally be over? We can only hope so. The Court now estimates that the backlog of cases can be tamed in two or three years. This is the chart on the Court's website that illustrates this reversal of a very long trend:

A provisional version of the Court's annual report and an analysis of statistics (including information on the number of cases per country) can be found on the Court's homepage. Russia, Turkey, Romania, Ukraine and Bulgaria. Compared to the 'top-5' of last year, the difference is that Greece no longer features (now placed number 7 with 52 judgments in which one or more violations were found) and that Bulgaria has entered the top 5.

As a small and last point of note, in the Annual Report, the president of the Court kindly refers to the blogosphere:

In addition, over the past few years a certain number of blogs have appeared online concerning the Convention and the Court’s case-law. They shed new and often valuable light on the way in which our case-law is perceived by others, contributing very effectively to its dissemination. We read them with the greatest interest and I commend these initiatives.

I would like to thank you for entertaining such an insightful blog on the ECtHR, which has been of good use for my Master thesis and, currently, for my PhD, in which I am intending to find out whether it would be advisable for the ECtHR to overtake an admissibility model of another constitutional court.

Nevertheless, I cannot but disagree with you on the caseload issue. Firstly, you write: ‘The Court now estimates that the backlog of cases can be tamed in two or three years.’

Where does this information come from? During my research, I have only encountered a statement of the Registry of the ECtHR from 2012 that the backlog of Single Judges will be cleared by 2015, sheepishly given that the Registry will have more resources at its disposal. (1, § 8) In any case, this leaves the backlog of Committee and Chamber applications unaffected. In 2011, this concerned about 60,000 applications. (2, § 12)

Secondly, you state: ‘Will the caseload crisis then finally be over? We can only hope so.’

Here I can only add a resolute ‘no’.

The more resource-intensive backlog of Chambers and Committees had been already acknowledged as a problem in 2004, where it was noted that 20% of the applications were assigned to a Chamber, but only 8% of the judicial decisions concerned Chamber applications, which resulted in a backlog out of which 40% were Chamber applications. (3, § 8)

In the meantime, there has been no significant change with 27% of all applications allocated, but only 10% of the applications decided not being dealt with by a Single Judge (i.e. not being clearly unmeritorious) in 2011. In absolute numbers, 5,135 of these applications were disposed of in that very year whilst at the same time 17,200 were newly allocated. (2, § 12)

Further aggravated by the ECtHR’s priority policy, low-priority (repetitive) applications and many medium-priority (non-repetitive) applications have hence ‘little prospect of adjudication within a reasonable time’. (5, p. 43) In brief: The changes introduced by Protocol No. 14, among which there is the Single Judge procedure, are not sufficient in achieving a balance between incoming and disposed applications. They ‘will not provide a lasting and comprehensive solution to the problems facing the Convention system’. (6, § 6)

Already in 2010, it would have taken the ECtHR 17 (!) years to dispose of all pending Chamber and Committee applications, assuming artificially that they can devote all their time for these applications (no new applications arrive, no Single Judge cases need to be dealt with). (7, § 8) This clearly demonstrates the hopelessness of trying to clear the backlog of Chamber and Committee cases under the current procedures. In my opinion, it is time for a full-fledged reform of the admissibility model of the ECtHR.

For any comments, useful material or academic discussions, I am further available under uctqrsc@ucl.ac.uk