Handover of Prisoners to Iraq by the British 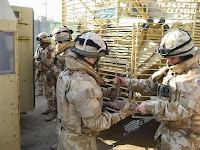 The British authorities ignored an order for temporary measures of the European Court of Human Rights in the very last days of 2008. The case concerned Iraqi detainees, held by British military in Iraq, who were transferred to the Iraqi authorities. This is reported by professor William Schabas on his blog Ph.D. Studies in Human Rights. Since the state parties to the European Convention are bound by such Court orders, the United Kingdom has clearly violated the ECHR here. Apart from this sad legal and human fact, Schabas also points to a very interesting aspect of the situation: the fact that the Court ordered the measure at all. This means indeed that at least prima facie the situation was not considered to be outside the Convention's scope, even though the relevant events took place entirely in Iraq and thus far outside any state party to the Convention. A new signpost in the ongoing discussion on the precise meaning of the hotly debated word "jurisdiction" in Article 1 ECHR.
Geplaatst door Antoine Buyse op 18:32

If I recall, didn't Saddam Hussein's attorney's argue that the coalition (which included the UK) be stopped from handing him over to the Iraqis (to prevent his execution)?

That's surprising, shocking even. Firstly, it's a surprise that the UK would fail to honour a binding order from the European Court, and secondly, given that the High Court had been 'minded' to grant leave to appeal in this case (al-Saadoon and Mufdhi), it's a surprise the case has reached Strasbourg at this early stage. I fail to see why that is. The High Court is unlikely to have withheld leave after all, and even if it had, the applicants could still have applied for leave from the Court of Appeal.

I happen to have some comment on the High Court's judgment at http://invisiblecollege.weblog.leidenuniv.nl/2008/12/30/cooperation-in-iraq-and-the-echr, but it seems I was wrong on the prospect of an appeal in England.

Tarik Abdel-Monem,
your memory does not, if I may be permitted to reply, deceive you. Saddam Hussein's case failed on grounds largely unrelated to this case. He was to be handed over by the Multinational Force, or the Coalition, and it was held the UK and the other European States were not responsible for the acts of the Coalition (as a collective), or of the other members of the Coalition (for which read: the US). In al-Saadoon, however, the acts in question were definitely those of the UN.

Thanks for your contribution. I fully agree. Just on correction: I suppose in your last sentence you mean the UK, not the UN (since then the case would be clearly inadmissiblwe as well).

indeed I did, thank you. Silly oversight, really. Mind you, we have seen the UK government try to argue that its contingent in Iraq is acting on behalf of the UN, and that acts of the Royal Armed Forces there are therefore not attributable to the UK. That was in Al-Jedda in the House of Lords, and the House was having none of it. I think it was right in that, but whether the majority's reading of Behrami (distinguished) was entirely fair may be open to question. But then, so may the correctness of Behrami...

Turns out the applicants did go to the Court of Appeal in England before applying to the European Court. Their appeal was dismissed on 30 December, and the Court gave its reasons for so doing yesterday: http://www.bailii.org/ew/cases/EWCA/Civ/2009/7.html.

The Court also notes there that it had refused to extend the injunction against the appellants' transfer, that an interim measure had nevertheless been indicated by the European Court, and that the two men were transferred anyway. Shockingly, the Court of Appeal did not find a word of criticism for that.

As with the High Court's judgment, I have some comment also on the judgment of Lord Justice Laws (with whom Lord Justices Waller and Jacob agreed) in the Court of Appeal: http://invisiblecollege.weblog.leidenuniv.nl/2009/01/21/cooperation-in-iraq-and-the-echr-an-awfu. I heartily disagree with it, and I would suggest the refusal to extend the injunction was also wrongful under the Convention - as was the eventual transfer, obviously.

Am I correct in thinking that now that Al-Saadoon and Mufdhi's case got dismissed in Iraq that this case will not heard on its merits in the ECtHR?